What's in your logs?

I’ve had this on the back burner for a few months but I’m finally getting around to writing up a post about it. I re-tested the scenarios listed below with log2timeline v0.63 in SIFT v2.12 and verified it’s still applicable.

I was investigating an image of a web server which was thought to have some data exfiltrated yada yada.. Log analysis was going to be a key part of this investigation and I had gigs to sift through.

Among a few other tools, I ran the logs through log2timeline and received my timeline - or so I thought. There wasn’t any indication that entire files couldn’t be parsed or files that were skipped in the STDOUT so one would assume everything was successful- right? Not so much. I don’t like to stick to one tool and this wasn’t going to be any different. I loaded the logs with a few other tools (Notepad++, Highlighter, Splunk, Bash etc.) and verified my results. As a result of being thorough, I noticed that there were a bunch of lines from the apache2 error logs which were present in the other tools outputs but were noticeably missing in my timeline. After some digging around and some additional testing with sample data sets I noticed there were a few problems.

The apache2_error parser says it has to match the regex of Apache’s defined format or log2timeline won’t process it:

…so why some of the lines in the logs followed it, it was later noticed that others were far from the required standard and resulted in a loss of data being produced. Examples of what I mean are :

As shown above, some of the logs were errors, permission denied statements etc. as a result of the external actor trying to issue commands via his shell (obviously not fitting the standard format). Once I noticed not all of the lines were being parsed I checked what else this parser required to be a valid line and did a quick sed on the fly and found any log entry that didn’t match the requested format and added a dumby beginning (date, time etc.) so it would at least parse everything.

This could have been done in many ways, with other regex’s etc. but for this example I just wanted a quick look to see exactly how many lines in the files didn’t adhere to the standard format so I did it this way:

It was a quick hack, but not an ultimate solution.

Even though some of the files didn’t contain valid lines, some of them were completely fine but yet still to my surprise, they weren’t parsed. It seemed that if certain lines existed within the logs that they wouldn’t get parsed … maybe even the possibility that at some point log2timeline would just skip the rest of the files and not try to parse them at all :/

Here’s an example of the type of data I used for the re-testing:

I flip-flopped the number of lines contained in the logs on occasion as well as the dates & order within a single file to test multiple scenarios and to see if certain lines were getting parsed.

So here are two files, both containing all valid lines:

So let’s try saying “*.log” for the file to be parsed:

…but by doing that log2timeline will only take the first file and skip everything else as the above image shows. I’ll admit that fooled me for a bit, I thought it would work.

If you supply the (-r) option you can’t supply *.log as it’ll result in an empty file (yes, I deleted the test.csv prior):

However, if you supply the (-r) option with a directory (i.e. $PWD) it will try to parse everything & tell you what files it can’t open. It will also tell you if a logs line couldn’t be processed, however, it doesn’t tell you from what file (if there’s multiple being processed) : 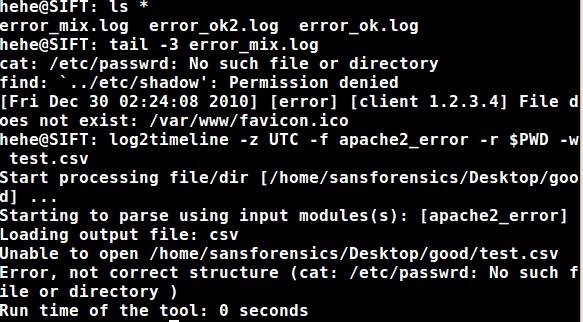 and it also doesn’t state that it stopped and didn’t continue parsing - If you look above, the error_mix.log had a date of 12/30/2010 after its invalid lines which doesn’t end up in our results …whoops:

So it looks like if there’s an invalid line within a log being parsed that log2timeline will stop processing that file? :/ … not much indication of that unless we already know what’s in our data set being parsed.

Right about now some of you are saying… hey man, there’s a verbose switch. Correct, there is. And while it’s helpful to tackle some of the things I’ve mentioned, it still isn’t the savior. When I ran the following:

I received this to STDOUT:

So the verbose switch told me it was processing the file, that it didn’t like a line within the file and that it finished processing this file… but it still didn’t process the entire error_mixed.log file again:

Now it’s possible that this has something to do with the amount of lines that are read to determine if there’s an actual Apache2 error log base :

But if that were the case I thought I’d see an error like this:

Ok.. so the above STDOUT at least tells us the file trying to be parsed couldn’t because its first 15 lines weren’t valid which goes along with the previously stated snippet about the 15 lines needing to be met. So what happens if we add other files to be parsed in the same directory as that file, same notification?

Nope - It appears we don’t get any notification that a file couldn’t be processed but with the (-v) switch on we get this information. So at this point the error_fail.log doesn’t have 15 valid lines so just for troubleshooting purposes I altered the error_mixed.log to contain the following:

This data set would suffice since there are at least 15 valid lines in the beginning of the file to be considered a valid file to parse so let’s try to parse a directory with the new error_mixed.log file and two files with all valid entries (error_ok.log & error_ok2.log):

Even with the verbose switch on it still didn’t state any indication that it didn’t continue parsing the file or skipped over any other parts of it besides the invalid log it pointed out.

I have some ideas of what can be done but I opened an issue ticket so others in the community could chime in as well. I talked with the plugins’ author @williballenthin and provided my test samples & findings and he agreed that there should be some others input into the solution. Here’ what I thought… the ticket has a typo, it was re-tested in SIFT v2.12 (2.13 wasn’t out yet :)

So why did I write all this up and why do you care? Log2timeline is purely awesome. It’s changed many aspects of DFIR but there’s always going to be improvements needed. It’s open source and for the community so the feedback will only make it better. Someone else may be dealing or have to deal with exactly what you’ve come across so why not make it known?

It’s crucial that you understand how the tools/techniques you’re using work to the best of your ability. If by solely relying on clicking buttons is your method of expertise, you’re gonna get caught at some point. Even though Willi didn’t have these types of examples to test the parser on when he originally created it, I wanted to get this information out there because I fear that there are others who might not have realized what I did.

If I hadn’t checked my timeline against other tools I would have missed key information for this analysis.

Do you double check your results? Are you seeing the whole picture?