In a previous post I looked at coming up with a process for determining XOR keys that were 256 bytes. I’ve received and have read some great feedback/posts regarding the tool and even though I wrote it in such a way to try and still possibly see patterns/repetitive bytes for smaller XOR keys, that wasn’t its purpose. There are plenty of other tools out there to try and assist oneself when dealing with XOR’ed files, however, recently a co-worker and I were left unsuccessful after exhausting those resources.

I’m often asked to look at some artifact that’s believed to be encoded in some fashion or hear that even if something is XOR’ed that they wouldn’t know how to go about decrypting/decoding it. I’m by no means an expert and sometimes find myself just as lost as you might feel but I thrive on learning and challenges, hence why I decided to work in the dfir space.

I believe this type of scenario is just like most others - the more time you spend doing it, the easier it becomes. Additionally, pattern recognition is key when it comes to XOR (pun intended). Determining the XOR key and any other skips etc. that might be used can be quite trivial, but let’s look at a few ways that make this type of scenario harder:

So you just have a file that you believe is encoded but you’re not sure how (e.g. - you try to open it and you don’t see any plain text). One of the easiest ways to determine if it’s XOR’ed is if while scrolling through it you start to see patterns emerging. This could be horizontal, vertically or maybe just repetitive characters constantly appearing - all depends on the key length and any other skips that might be in play.

When I say skips I’m referring to the XOR routine skipping null bytes, line feeds, carriage returns, not XOR’ing itself (e.g. - if the key is A5 then maybe if it sees A5 it skips it instead of XOR’ing itself) or some other trick.

Again, these are easier to determine if you have either of the first two bullet points listed above…but unfortunately that’s not always the case.

In a recent blog post there was mention of the malware named XtremeRAT and additionally a few tools to help in scenarios where you’re investigating incidents involving it. One of the scripts listed there is for decrypting a keylog file created from XtremeRAT with a two byte XOR key of ‘3fa5’. While it’s helpful to know that two byte XOR key is used,

To try and solve these questions I decided to leverage a combination of YARA, the script xortools from Malware Analysts Cookbook (the book that keeps on giving) and use case examples from some others within the YaraExchange. Xortools has some useful functions for creating different XOR’s, permutations and then spitting them out into YARA rules… sweet, right?

The functions within xortools didn’t quite have a solution for what I was trying to do but some quick modifications to a couple of them was easy enough to implement. Let’s break down the thought process:

For some additional hints on what you might see within a keylog file, check out Ian’s YARA rule for DarkComet_Keylogs_Memory.

Good thought process thus far, but what if those strings aren’t contained within the keylog file? You wouldn’t necessarily know unless you’ve previously dealt with this malware or have come across an example online…so another approach to think about is what is likely to be recorded on the system? Here are some examples I’ve found helpful:

This should help make things more flexible and tackling the unknown aspect.

The top is the original and the bottom is an example of how to generate the pair by adding another loop and at the end saving the two byte key for use in the rule name. Note: Doing it this way may produce hex characters that are only a nibble and YARA will not like that if you’re trying to match on hex characters so to circumvent it, I decided to add a wild card ? as the other nibble.

Next, we need to feed those two bytes to an XOR function and XOR the string we passed it. Finally, leverage the yaratize function to create the YARA rule. I got things working and when I went to scan the XOR’ed keylog files I received Error 25 from YARA (sad face). After some troubleshooting I was told this issue was being caused by having too many strings in a single rule. Essentially, Error 25 ‘ERROR_EXEC_STACK_OVERFLOW’ meant I was hitting a hard limit on the stack size. No bueno… My options were to tweak line 24 in libyara/exec.c or create better YARA rules. By creating so many strings and using the pre-existing yaratize function within xortools my rule looked followed this structure:

You’ll notice it’s the standard rule format most of you are probably familiar with seeing: rule name followed by the strings to match and at the bottom (not shown) would be the condition. After some testing I determined that ~16k strings to match on seemed to be the limit that YARA would accept in a single rule (that’s based on my systems config. + length of string to match etc.).

Back to my options - I could tweak that setting in YARA which I didn’t want to, have a counter and only add X amount of strings to match per rule or the third option of creating one rule per string. The third might not be familiar to some of you but that’s what I opted to go with. It creates a larger file because of all the extra characters you’re adding but with the new version of YARA, performance shouldn’t really be too much of a factor. An example of this type of format is:

Now that this hurdle was bypassed, I was able to use the YARA rules generated. On a test file that I XOR’ed with the key ‘3fa5’ the YARA rules worked …however, they still weren’t working on the keylog files from XtremeRAT - Err!

Note: the (-s) switch to YARA tells it to print out what matched, which is important here because our string name has the XOR key in it and the (-f) switch tells it to use fast matching mode, which only prints out the first match in the file instead of every time it’s matched.

Alright, so let’s pop open the XOR’ed test file I created and check out its hex and compare it to what I was seeing in the XtremeRAT files:

Here’s what the test file looks like XOR’ed and in plain text, respectively:

If you’ve read anything on XOR’ing before you may be aware that XOR keys can present themselves based on what they’re XOR’ing (hence why sometimes they have skips/checks implemented). Focusing on the bottom file, I’d say a5 is part of the XOR key - if not the key itself (depends on the length you’re dealing with). Circling back to the XtremeRAT blog post we know a common key is 3fa5 so it appears we’re being presented with half the key when we browse through the XOR’ed keylog file.

Now if you recall back to previous YARA rules being created, I was producing a straight two byte XOR without any skips… if you look at the above files you’ll realize, or maybe after some troubleshooting, that this conversion won’t work in this instance as the keylog file doesn’t have each byte sequentially (e.g - If the word within the keylog file we’re looking for is Microsoft, the keylog file doesn’t show it as that word XOR’ed in order, but rather with a5 in between each XOR’ed character.) Hm, what’s happening? According to the blog post,

“XtremeRAT’s key scheduling algorithm (KSA) implementation contains a bug wherein it only considers the length of the key string, not including the null bytes between each character, as found in these Unicode strings”.

Now without having the binary or source code to make that determination (which I didn’t), it should still become evident if you try and do a comparison:

On the left hand side of the above image is another look at the previously shown test file I created with some common keywords typically found in a keylogger file and on the right hand side is a sanitized copy of one created by XtremeRAT. In each of the panes, the word Microsoft is highlighted in the format of the particular file it’s part of. For a visual guide of what’s going on and what should be expected I put together a quick image: 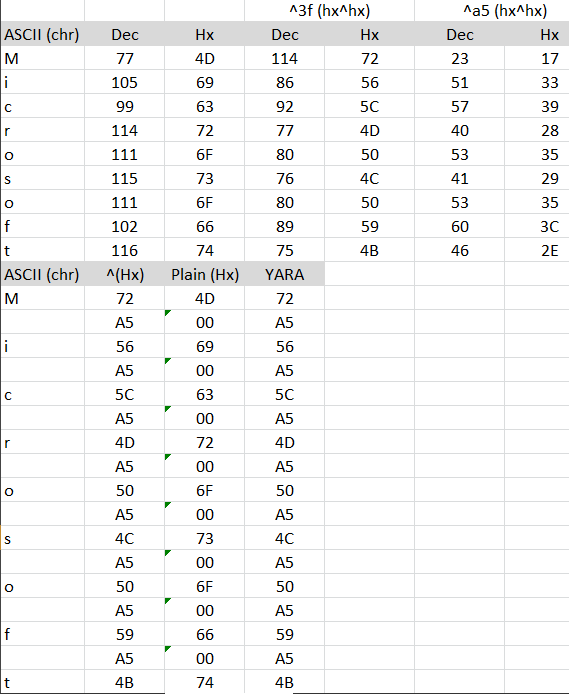 The top section shows the string Microsoft in its native form, converted to other formats followed by what its representation would be if that particular character was XOR’ed by each half of the two byte XOR key 3fa5 by themselves. The bottom section again shows the same string but separated by a5 as shown when viewing the keylog file XOR’ed followed by what would be required in a YARA rule to match on this particular string as it’s seen within the XOR’ed file (hope this makes sense).

When stuck or first starting off with something like this you can reference online tables or use online systems to see binary/decimal/hex conversions but it might be worth while figuring out how to do it programmatically in something you feel comfortable with - python, perl, bash, M$ Excel etc. to try and see what’s going on.

Below is another copy of the same exact table shown above, but this time with two columns highlighted. The top column helps show each character within the string Microsoft as its value in hex once it’s XOR’ed with the single byte key of 3f. The bottom column contains the same information, but has the second half of the XOR key a5 inserted in between each of the strings characters. 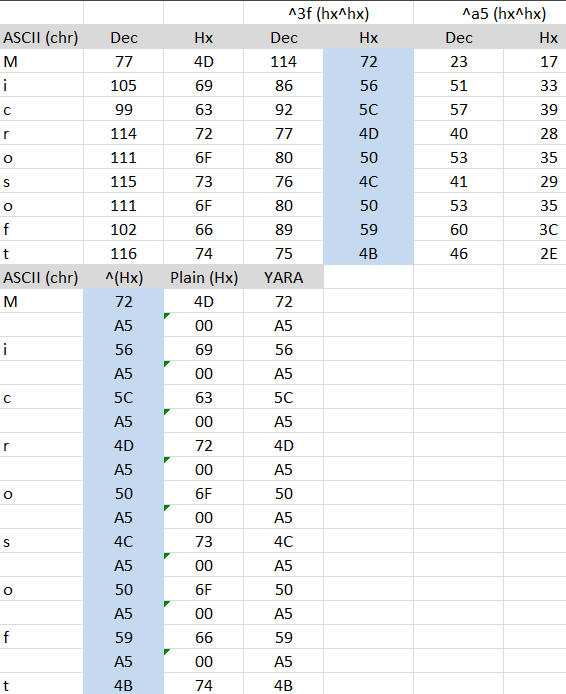 We first see what the new YARA rule for 3fa5 looks like (which as the second byte as itself a5) and first see that it doesn’t match on a file that’s XOR’ed normally with the two byte key 3fa5 and lastly that it now matches on a keylog file XOR’ed from XtremeRAT with the added null byte routine.

So how easy is it to code? Pretty easy since the majority of it existed, just some slight modifications and you’re good to go. You just need to modify the permutations function to generate combos of two byte XOR keys:

and push them over to the xor routine of need:

and finally to a function to create the YARA rules:

and voila, game over. This should hopefully have helped explain a little more on what XOR is, how to go about detecting it and another resource you can use in the future for trying to brute force what a possible XOR key is based on some common strings that might be present. Since xortools is hosted on Google code I opted to put up a modified version on my github instead of just a patch. I’m not the original author of all the code, just a guy modifying as needed.